The Strathclyde team of Dino Jaroszynski are very pleased to report that the experiments using the ALPHA-X beam line are now underway following the initial start-up that occurred on the first of March, 2007. This marked the first time that approximately the full power of the femtosecond laser beam (~900mJ after the vacuum compressor) was focused into a plasma accelerator for the production of high-energy electron pulses. 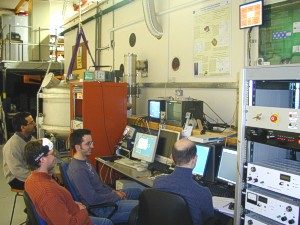 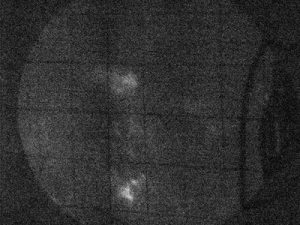 CCD image of electrons incident on a Lanex screen downstream of the gas jet.

The first experiment involved the use of a gas jet as the plasma medium and the first days’ operation was a simple imaging check of the plasma output with a Lanex screen positioned downstream. No doubt this was production of a low energy continuum, i.e. not a quasi-monoenergetic beam, but it still represents a significant landmark for the ALPHA-X Project after several years of beam line construction. 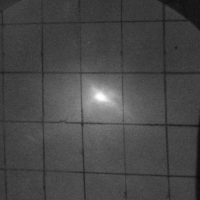 Image of an electron bunch captured on a Lanex screen downstream of the gas jet. 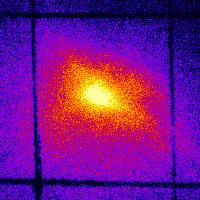 False colour image of the electron bunch in Figure 3.