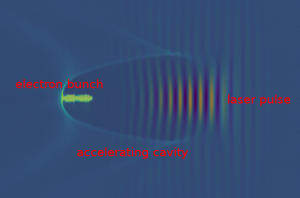 The accelerating cavity trailing an intense laser pulse propagating in an underdense plasma.

A high-power femtosecond laser pulse propagating in an underdense plasma produces an electrostatic wake which can be harnessed to accelerate electrons to GeV energies in several centimetres. The ponderomotive force arising from the light pressure pushes aside the plasma electrons to generate accelerating cavities containing electrostatic fields which are 3 orders of magnitude larger than is possible in the RF cavity of a conventional accelerator.

The excitation of a plasma wakefield is analogous to the wave behind a motorboat on a lake. Background plasma electrons can become trapped inside the cavity and accelerated by the Coulomb force associated with the wakefield. In our analogy, a surfer riding the wave behind the motorboat would gain energy from the wave.

Laser pulses from commercially available table-top terawatt femtosecond lasers are suitable drivers of plasma wakes. The workhorse for the ALPHA-X laser wakefield accelerator beam line since 2007 has been a 40 TW Ti:sapphire laser system, which allows to routinely produce femtosecond electron bunches with 100-200 MeV energy and 1-10 pC charge. The SCAPA facility will also provide a 350 TW laser system, which can produce electron beams with GeV energies. 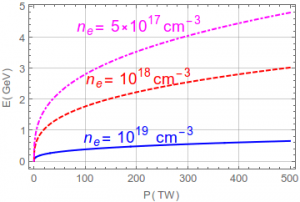 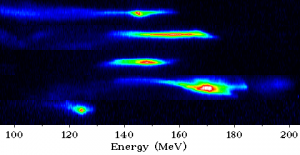