The ultra-short electron bunches produced by laser-wakefield accelerators may drive a new generation of high brightness, short duration radiation pulses extending over a wide frequency range from THz to X-rays. Processes being currently investigated for applications and diagnostics are betatron radiation, coherent transition radiation from a thin metallic foil, undulator radiation and backscattering off plasma wakes and ionisation fronts. 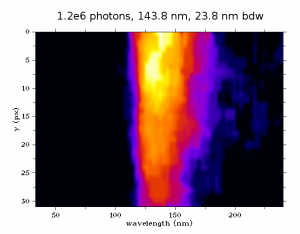 An undulator consists of an array of permanent magnets with alternating polarity. Electrons traveling through the magnetic field experience a periodic transverse acceleration, which in turn produces electromagnetic radiation. The wavelength of this radiation is proportional to the spacing of the magnets (undulator period) and inversely proportional to the square of the electron kinetic energy. This gives a tremendous tuning range for the radiation. To obtain the shortest possible wavelength one can minimise the undulator period or, more effectively, maximise the electron energy. An undulator (with variable magnet gap) for the ALPHA-X project was designed and constructed by the ASTeC team at Daresbury Laboratory (STFC). Plasma undulators are being developed to shorten the undulator period for future compact X-ray sources.

The free-electron laser (FEL) amplifies externally injected or spontaneously emitted radiation in an undulator by inducing wavelength scale microbunching of a relativistic electron beam by a periodic ponderomotive force arising from the combination of a periodic undulating force and an injected electromagnetic wave. Superradiance, a highly nonlinear phenomenon, ensures the production of stable, ultra-short pulses.

An electron bunch passing through a thin metallic foil will generate transition radiation (IR and THz), which is coherent when the bunch length is shorter than the wavelength of interest. As well as being a bright source of IR radiation, CTR can also be used to diagnose properties of the electron bunch, such as energy, shape and duration. CTR measurements performed at the ALPHA-X beam line have shown that electron bunch duration at the exit of the accelerator can be as short as 1-2 fs. 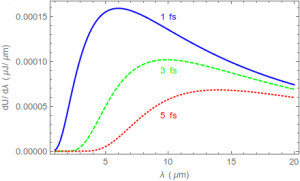 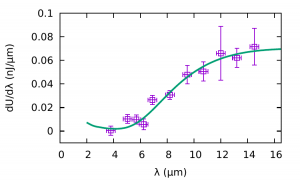 Backscattering off wakes and ionisation fronts

A single-cycle THz pulse can be backscattered off a plasma or ionisation front acting as a relativistic plasma mirror. A double Doppler upshift converts the radiation pulse into a single-cycle pulse in the visible region. Tailoring the arbitrary shapes will be investigated with tailoring of the incoming THz pulse shape.